Sotheby’s current show includes the work of a previously unknown artist, though hardly a beginner… Henri Barande estimates he has produced about 40.000 sculptures over last 50 years. Many have been temporary assemblages, preserved now only in photographs. His making of art – paintings, drawings and monotypes, as well as sculptures – has been part of of a closely guarded secret life, and the work itself concerned with buried treasure. Barande’s is an oeuvre informed by such deep personal passion and intense intellectual commitment that its creator only recently agreed to out himself as an artist… So a small, discret group of curators and critics, including Guy Jennings, director of Sotheby’s operations in Switzerland, was invited to view Barande’s atelier. All were astounded, they say, by the vastness and the maturity of the work that awaited them… His work brings this evidence to light through what he calls « objets retrouvés » – « re-founded objects » for which he is the custodian. These are arranged into spare but intensely poetic ensembles that he describes as « tombs ». Some of Barande’s tomb-offering are indeed found objects, but the most characteristic are human figures and heads originally molded in clay, bread and earth or concrete and they cast in bronze, retaining every trace of the artist’s kneading fingers. These are jutaposed with a strip of barber wire,say,or the skull of a bird. Then there are purelyabstract, geometrical forms, or minimalist chair shapes. …For the exhibition in Zürich, Barande devised a subtle architecture dividing the space into five distinct « tombs ». On the floor, narrow strips of molding surround no-entry areas, where the artist has scattered a thin layer of sea salt. This is meant to accentuate the spacial restrictions and to suggest the way Phoenician civilization was « sublimited » in Carthage. A bravura outing of this sort will be hard act to follow, but Barande is prepared to wait until a comparable opportunity presents itself for another show… None of the works are for sale, and it would be a pity to disperse them… David Galloway is an Art critic and free-lance curator in Wuppertal, Germany. 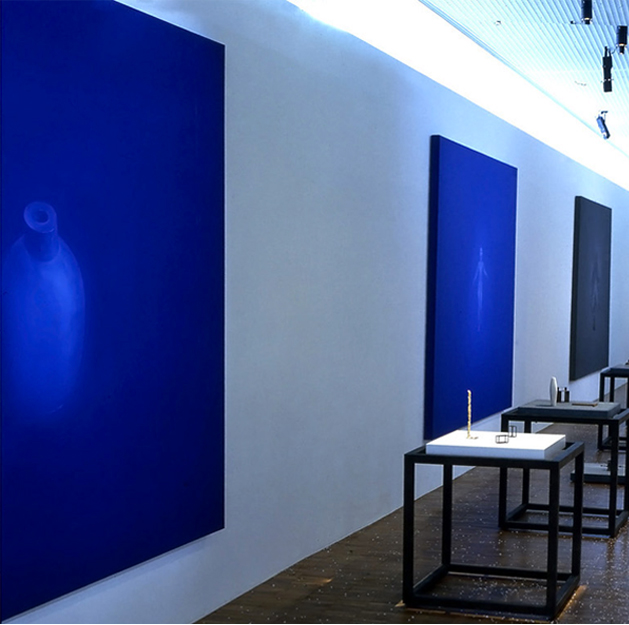